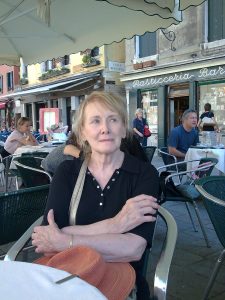 Just as I was boarding the vaporetto, at San Marco, I noticed a young Italian wearing the white uniform of an officer of the Marines, who was gazing at me intensely. Despite my fatigue, and my shoes hurting, I remained standing, undecided, next to the barrier that the steward opens and closes at each stop. The Italian continued to stare at me. I lowered my eyes onto the Venice guide book I held in my hand. A few minutes later I heard a voice asking me in English whether I was German. It was the officer. I replied in French. He spoke that language too. Like me he got off at the stop for the Accademia, and as we stepped off the vaporetto, he invited me to have coffee in a café on the Zattere. His name was Lino.

I had been walking all morning, in the area of the Arsenale, visiting the naval museum and spending several hours in the Aperto exhibition, devoted to the work of young artists. There was a painting from New York of the pope surrounded by flyers violently attacking his opposition to the use of condoms, another called La Cicciolina on the night of her wedding, and above all, a whole room sponsored by Benetton, covered from top to bottom by photographs of penises and vaginas. I had planned to return to my hotel, near the Rio San Trovaso, to change my shoes. Nonetheless, I accepted the invitation to coffee on the Zattere with the Italian. I must have thought that I would have plenty of time to get rid of him.

On the terrace of the Cucciolo café he told me that he had completed a law degree and was doing his military service in Venice. In December he would go back home to Rimini. I did not want to ask him his age in case he asked me mine, and I made sure I was sitting against the light so that the wrinkles on my forehead would be less visible. He said he was surprised that I was a teacher, he had thought I was a journalist, in Venice for the cinema Biennale, because of my long, flat sandals, made of leather pierced with holes, like the ones worn by little boys in the 1950s. After some hesitation, I told him that I also wrote books. I saw from his expression that he did not believe me. I let him accompany me to the bell-tower of San Giorgio, where I had been planning to go later in the afternoon, after a nap, and wearing different shoes.

At the top of the tower, in each of the narrow alcoves from which you can see the whole lagoon, he held me tight. I was not sure what I wanted. Once we were back down on the square he suggested we should walk along the quayside, behind the church, a deserted part of the island, that I had never visited before. We walked side by side, without speaking. My mind was blank. He took my hand and we continued to walk, without speaking or looking at each other.

As soon as the young Italian grabbed my hand I fell into a strange state, unimaginable a moment beforehand, a feeling of being overwhelmed and delighted, that had nothing to do with sexual desire. I felt that I was really the panicked, empty-headed teenager of thirty years ago, when the ruddy faced boy I had met at the dentist’s put his arm round me for the first time in the deserted street that skirted the cemetery, and we had continued to walk for I don’t know how many yards before he embraced me and kissed me. Unlike those dreams where a time in your past life becomes your present, until the moment when you wake up, I felt I was living both past and present, my seventeenth year in Yvetot in Normandy, and this moment in Venice, at the same time.

I was the same body, with the same sensations in two periods of time that had come together, without merging. Adding another layer to the amazement I felt then, and was feeling again now, that this could happen to me, was the surprise of reliving that past time. Everything that had happened between these two moments, my life history, felt external to me. This story – the studies, travel, marriage, children, teaching, losses, all this wealth of places passed through, people encountered, loved, lost, of books read – had not been wiped out, but the time, the years it had taken to elaborate were erased. No doubt, as I thought later, it was precisely all of this lived experience that gave this moment of my fingers interlacing with the Italian’s its special value and its pleasure.

We arrived at a park. I let him press me against a wall where a large grey cat was sleeping. He kissed me and caressed my breasts. Suddenly, violently, my own desire was aroused. From then on I was only in that one time, the present of desire. We agreed then that we would meet that evening at his place, once he had finished his duty at the barracks.

The next day at the airport, while I waited for the Nouvelles Frontières flight for Paris, I re-played the images of the Italian man’s body, the gestures of the night, in his room near the Cà Rezzonico, with pigeons cooing under the rooftops. Above all, I returned to that moment when he had taken my hand, as we walked in the garden of San Giorgio.  I remembered that unknown, overwhelming sensation of being in the present and the past at the same time, but I did not experience it again. It was a discovery, made by my own body, through my passive consent to a coded pick-up, practised by a very ordinary young man and directed at any woman, regardless of her age. I felt no shame, but on the contrary, a sort of wonderment. Because I always expect that life will offer the solution to my writing problems, I felt that this meeting on the vaporetto had suddenly brought me closer to the book I wanted to write.

This was twenty years ago. I did in the end write that book, and I called it The Years.

Translation by Lyn Thomas of ‘Le jeune homme de Venise‘, originally published in Le Devoir on November 16th, 2011. Our thanks go to Annie Ernaux for her permission to reproduce and translate the text.