From 6 to 13 July 2012, the conference ‘L’oeuvre d’Annie Ernaux: le temps et la mémoire’ [‘The works of Annie Ernaux: Time and Memory’] took place at the Centre culturel international in Cerisy-la-Salle (programme). Organised by Francine Best, Bruno Blanckeman and Francine Dugast-Porte, the week-long conference allowed for rich discussions – in which Ernaux took an ample part – around many of the dynamics which structure the works of Ernaux and its reception: memory, history, writing, domination and power. 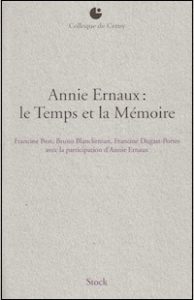 This book brought together researchers from a range of disciplines. Each chapter is followed by a response from Annie Ernaux, and an account of the discussion that took place at the conference, thus giving the whole the appearance of spontaneous conversation.
Time and memory are the principal thematic threads running through the book. They are tackled from several perspectives: the evolution of social groups, the question of humiliation, shame and the problem of cultural hierarchies, or, indeed, the creation of women’s cultural memory. Writing, for Annie Ernaux, is about trying to capture the multiple dimensions of lived experience, balancing the pressures of History and the power of memory in the representation of collective as well as personal life. Revitalising critical approaches to Ernaux’s works through a particular attention to their textual qualities, which have sometimes been sacrificed in favour of a purely sociological approach, this book allows us to measure their full wealth and power.

(Translation into English by Lyn Thomas)

The three of us had been following Annie Ernaux’s publications from the start, and were spellbound by The Years.[1] Francine Best took the initiative to sound out Edith Heurgon, who welcomed the idea of a conference on Annie Ernaux’s work. Notably with the help of Francine Best – specialist in philosophy and close reader of Paul Ricoeur –, we came up with a main theme which gave us the title of the conference: Annie Ernaux, Time and Memory. In this way we avoided a re-run of the excellent analyses developed to date in numerous articles and works inspired mainly by sociological and socio-critical approaches.

We were all the more motivated when we heard that, luckily, Annie Ernaux had accepted our invitation to take part. We knew of her strong commitment to, and careful respect of scholarship. We could rely on her willingness to engage with critics and academics, that she would accept debate (as demonstrated by her reflective writings on her own work and her responses in interviews).

We didn’t want to shun the fundamentally questioning characteristic of her work, its denouncement of relations of domination. But we wanted the contributions to come from participants with diverse affiliations, and thus to have intersecting approaches coming from multiple points of the ‘realm of reasoning’ going beyond the literary disciplines of history, philosophy, didactics, reception studies, etc. In actual fact what we discussed during the conference were various socio-historiographic approaches. We also expected the ethical dimension of the conservation of the past would be addressed – as Annie Ernaux insists on so much in The Years – a dimension inseparable from aesthetics, the question of the right form to use (the painting by Dorothea Tanning symbolises this approach).

The issue of form seemed crucial to us and, indeed, in her introduction Annie Ernaux invoked Valéry and the ‘beautiful works, daughters of their form, which is born before them’.[2] Over her diverse output, we wanted to deepen the stylistic and poetic analyses already well rehearsed by literary criticism; to recognise the considerations arising from other contemporary modes, such as photography and song. We did not want to lose sight of the process of writing by a writer clearly now to be seen as great.

Clearly she commands significant status as a writer. She frequently appears in literary broadcasts; she is interviewed by newspapers and magazines. Notes of these conversations appear in publications. People seek out photos of her, she is filmed, she is a superstar author – however unwished for this is on her part. The erroneous announcement about the Nobel prize in October 2021[3] triggered a wave of intense interest, demonstrating the extent to which she is seen as an author of renown. She is an ‘established’ writer, with many of her books on the secondary school curriculum. She is sought after in the world of ideas and of politics. She signs petitions and is often a member of committees which take the initiative to do so. Her signature counts for something, it gives weight. At the start of the twenty-first century, she personifies a distinctive form of political engagement.

She is frequently referred to and cited on radio and television by other writers, by essayists, by specialists in the humanities whenever the debate is about a person’s road to achievement or social mobility. She is an important point of reference for authors of the numerous works that speak of people who have moved from one class to another, the socio-cultural gulf between the classes. She bears witness to the humiliation and the shame, giving them status through the place she accords them whilst also giving structure to other discursive fields.

She is an important presence in the women’s struggle, starkly revealing the condition of women. She lays bare individual histories but also the History of the last eight decades, with numerous references back to the first part of the twentieth century. She does not seek to pretty it up, the ‘scalpel’ of her writing rips away all masks. She does away with illusion, focussing sharply on the reverberations of historical events, transcribing the shifts. Young readers of The Years often say that in her work they have recognised the narratives recounted by their parents and grandparents.

The force of her testimony derives very particularly from the use of the first person, as so often noted. Going on from the important discussions on the issue of autobiography and autofiction, there is a shift towards the ‘I’ being expressed with renewed force as a ‘we’, as ‘all of us’, an important re-focussing.

After the portrayal of the twentieth century shown in The Years, it seems to me that her later works are kinds of amplifications, focussing in close up on issues, new clarifications. For example, the reflection of society is at once more complex, more critical, perhaps even more resigned and more despairing in Look at the pretty lights darling[4]. The laying-bare is more brutal, more cruel, in A Girl’s Story[5] in which the transgressive nature of her work is foregrounded. The register chosen challenges accepted literary language but produces its own poetic resonance, echoes the proclamations of the great moralists. Her narrative demystifies the ways in which literature can have a mollifying effect.

What has been most striking in the course of the last few decades is the large number of adaptations of her books such as for the radio and theatre with some favourable results, including performances of short, intense monologues always in front of a full house.

There’s been the same considerable success with cinema, particularly this past year 2021, where Annie Ernaux has inspired two outstanding directors, resulting in the most prestigious European prizes.[6]

She occupies a particular place not through taking a didactic stance or putting forward a particular thesis but through the power of literature, through its own impact, one that is different from history alone – and certain exchanges in the conference demonstrated this specificity extremely well.

[3] DdT/Translator’s note: in October 2021, Annie Ernaux was named as one of the favourite contenders for the literature Nobel Prize, which was eventually awarded to Abdulrazak Gurnah.

[4] DdT/Translator’s note: our translation of Regarde les lumières, mon amour, untranslated as yet in English.