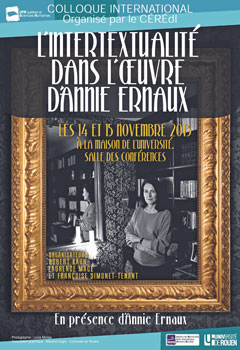 Intertextuality (French and international) in the work of Annie Ernaux is the main theme of this volume. For a long time, academic literary criticism considered life writing as practised by Annie Ernaux, motivated by a search for truth, to be a facile solution, devoid of any literary heritage. What was important to us here was to show how the continual working through of memories of reading and writing nurtures Ernaux’s creative process. Ernaux’s works undeniably have their roots in a range of influences, both admired and contested, which encompasses both consecrated writers (Proust, Woolf, Camus, writers associated with the Nouveau Roman) and popular culture. This book refreshes earlier critical approaches to Ernaux’s writing by emphasising the complex genealogy of works woven from literary texts and references but also open to the murmurings of the wider world. The works of Annie Ernaux are important for many reasons, not least because she succeeds in creating a voice which is both personal and universal, thanks to an intense and masterly intertextual and more broadly intersemiotic play of meanings and references.

(Translation into English by Lyn Thomas)